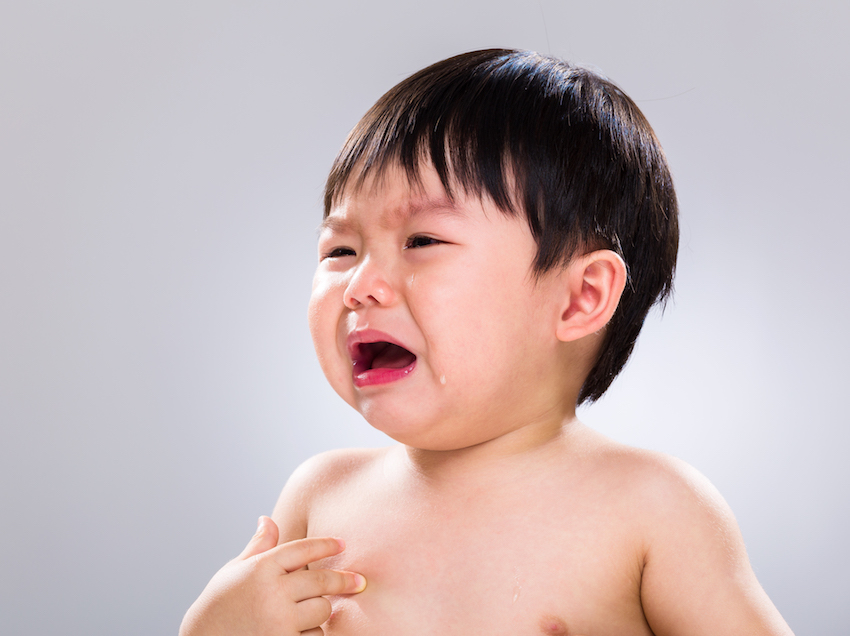 If only we had a dollar for every toddler tantrum we’ve seen in a shopping centre or supermarket. The screaming, crying, dramatic falling to the ground, kicking, stiffening of limbs,  running away – it’s a parent’s worst nightmare!

What is perhaps bad news for parents who were hoping they could escape these scenarios, tantrums are equally common in girls as in boys. They occur between the ages of one and four when children are learning how to cope with big emotions.

What we can help you with, is giving you 10 evidence-based tips to help with taming your child’s next emotional outburst.

Clinical Psychologists have found that if a child engages in disruptive, defiant, or aggressive tendencies, the remedy is to police every aspect of this behavior. How exactly do you do this? Make sure to set boundaries early on that anti-social behaviour, acts that may cause damage, and actions that could hurt feelings and physical injury, are unacceptable. A first step to this is to make sure your kids have positive relationships with the people around them, where they can base their own the behaviour and outlook on what they see from the people who surround them.

Helping kids develop socio-emotional skills and trying not to let them enter situations which will overwork their abilities is a great step to avoiding temper tantrums. Child behaviour studies have found it’s important to state expectations clearly and calmly, and put the emphasis on positive choices rather than prohibitions. Talk to them about how emotions work, and identify and eliminate triggers that can cause them to throw tantrums. Reward children by encouraging positive behavior, and provide positive feedback when they do the right thing.

Research reveals persistent evidence that if a child is having trouble sleeping or not getting enough sleep, it is externalised in their behavior. Where children were given restricted sleep, they were more prone to showing oppositional behavior, including defiance and disobedience (Baum et al 2014, Mazurek and Sohl 2016). According to the National Sleep Foundation, children between the ages of one to five should be getting approximately 11-14 hours of sleep a night.  They recommend maintaining a regular and consistent sleep schedule and setting a relaxing bedtime routine.

4- Take care of YOURSELF

Keeping yourself calm when your child has tantrums is one way of doing it. We’re not saying it’s easy. Having your child throwing unexpected – or even expected – tantrums can be a major stress trigger. Learn to adjust your expectations from your child in that moment, and find the thing that help you remain calm. Whether it’s deep breathing or learning to recognise that feeling of stress in order to let it go – find your own technique and use it to your advantage.

Fostering a positive relationship between siblings helps to teach and enforce principles of fair play (Feinberg et al 2013), which comes in handy for a child to recognise when they’re not behaving in a fair way to you. Helping them recognise this just before a tantrum can help to stop the explosive behaviour from happening.

Help your child understand that people are not bad, they are just faced with certain circumstances in their life which led them to act in the way they did. They are just responsive to the environment that they were in but are still capable of change.

For example, in a study, one group of kids were trained on the flexible nature that is personality. They were then put into a hypothetical scenario of bullying.  Kids in this controlled group, compared to those who were not, described themselves as less likely to seek revenge (Yaeger et al 2011).

Children in a study showed that they felt less aggressive, and were more compassionate towards others, when asked to visualise their loved ones or remember a time they felt cared for (Mikulincer et al 2001; Mukulincer et al 2005a; Saleem etal 2015). How can you apply this to calming a child’s temper? Show them how to resolve negative emotions by recognising that there are supportive people who care for them.

Sometimes even people have good social skills have the tendency to become aggressive. They know how to avoid it, but they’ve convinced themselves that their behavior isn’t wrong (Gini et al 2014). It is therefore important to train your child to recognise or reject these mechanisms of moral disengagement. This can be done by giving kids compelling examples, and encouraging them to analyse the questionable justifications they see around for them to recognise it in action (Bustamente and Chaux 2014).

Use disciplinary ways to teach children how to solve problems, and know the tactics that actually work. Studies show that children who were given harsh punishment like spanking or hitting as well as shame tactics were more likely to develop worse behavior problems such as resentment.

The most effective tactics were those that combined non-physical sanctions, like reasoning or explaining the rules and their purpose. This includes talking with kids about how to avoid trouble (Larzelere and Kuhn 2005).

If there are things that you do not feel confident solving yourself, or if there are challenges about your child which you cannot resolve, know that it’s okay to seek professional help. Seeking the help of a life coach, psychologist, or psychiatrist, could be one way to reach out for help on challenges that you are facing.

Certain behaviors the seem like a red flag to you could be indicators that your child is at risk of an emotional or behavior disorder (Wakshlag et al 2014). Know that you are not being defeated, you are just doing what’s in best interest of your child as they develop.

Toddlers, the benefits in teaching structure